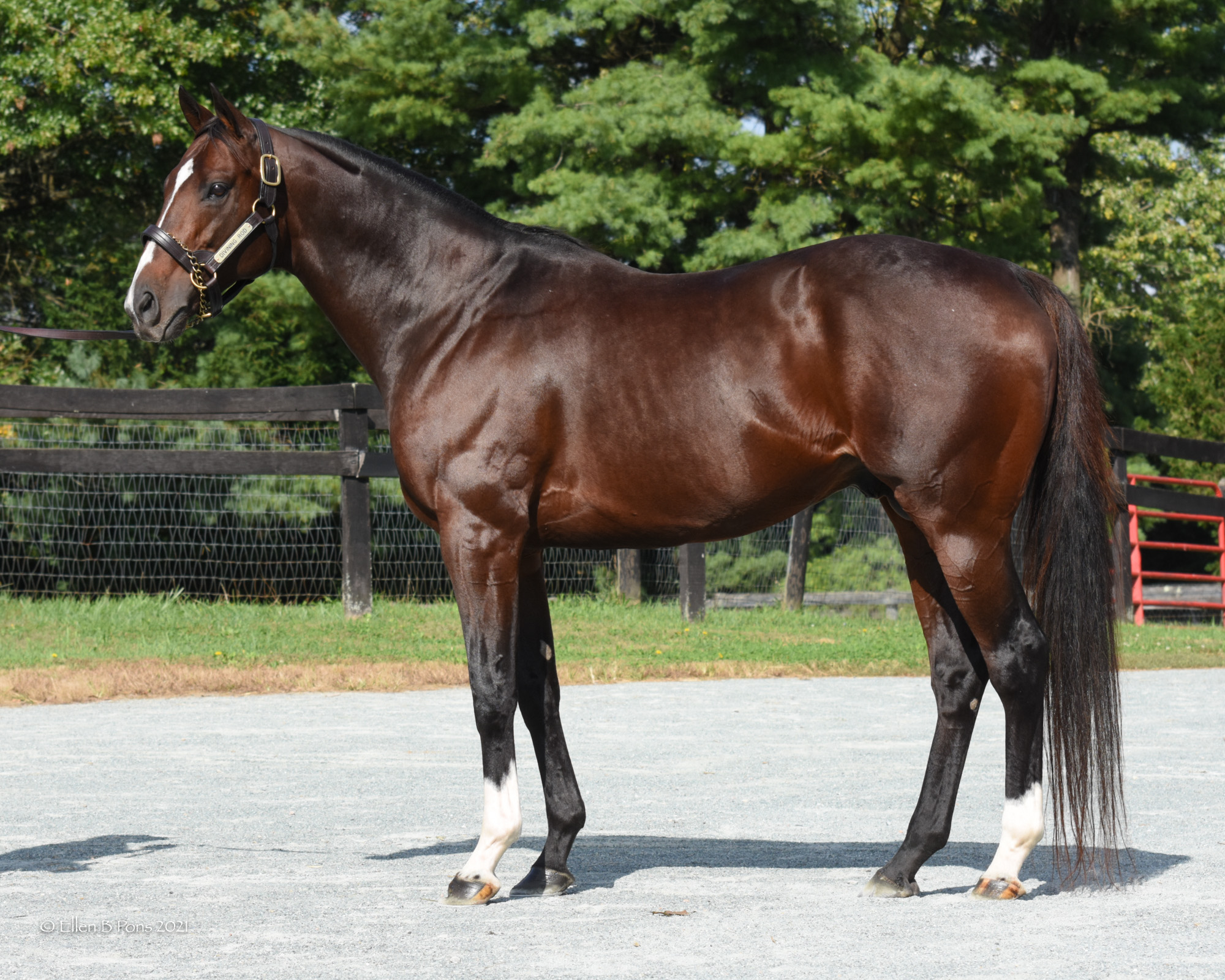 DIVINING ROD is the leading Mid-Atlantic Second Crop Sire and Top 15 Nationally (he is the highest ranked 2nd Crop Sire outside of Kentucky). His first-crop winners include 3-time stakes winner CLIMBER, earner of $328,000, two-time $100,000 stakes winner LOCAL MOTIVE, stakes-winner DIVINE HUNTRESS (winner of her NW1-other by 12 3/4th-lengths at Parx and 2nd in the G1 Acorn Stakes at Belmont) and stakes-placed LOOSE ENDS, who was 2nd in the $100,000 Crowd Pleaser Stakes at Parx on 6/27/22.

By TAPIT out of three-time Grade-1 winner PRECIOUS KITTEN, DIVINING ROD broke his maiden in his debut at two, a wire-to-wire 3-length win. Racing in the Lael Stables silks of his breeders—Gretchen and Roy Jackson—DIVINING ROD went on to earn $882,604 in three campaigns, including a classics-third-place finish in the 2015 Grace One Preakness Stakes to Triple Crown winner American Pharoah.

In the Grade One, $500,000 Cigar Mile, DIVINING ROD lost a head-bob decision to Curlin’s son CONNECT.  The Cigar Mile is regarded as a “stallion-making” stakes. True to form, CONNECT ranked second only to GUN RUNNER on the 2021 Freshman Sire List.

The Jacksons bred DIVINING ROD from their fabulous three-time Grade-1 winning mare PRECIOUS KITTEN—a 3/4-sister to Leading Sire KITTEN’S JOY. PRECIOUS KITTEN, who earned $1,912,543, is also the dam of Grade-3 stakes winner JEHOZACAT, who for the Jacksons produced a 2021 colt by Leading Sire INTO MISCHIEF, and to whom she was bred back for 2022.

“Divining Rod gave us many thrills at the track, especially when he almost won the Cigar Mile,” said the Jacksons. “With his physical, pedigree, and performance on the track, we believe in him as a stallion. We have supported him in the breeding shed and in the sales ring.”

Their support at the 2021 Fasig-Tipton Midlantic Yearling sale resulted in the highest-priced yearling by a regional sire, when they bid $115,000 for a DIVINING ROD full-brother to two-time juvenile winning filly PETITION PRAYER, both out of the Arch mare WRITTEN REQUEST.

“I saw DIVINING ROD win the Lexington Stakes (Grade-3), and I kept my eyes on him.  We sent 20 mares to him his first two years in the stud and we are seeing the results of our support in the number of winners in his first crop. He may be the next TAPIT.”

DIVINING ROD was trained by Arnaud Delacour. Race career recap: DIVINING ROD won 1 of 2 starts at two; at three, he finished a neck back in second in the $100,000 Sam Davis Stakes (Grade-3), then ran third in Carpe Diem’s Tampa Bay Derby (Grade-2) before winning the $250,000 Lexington Stakes (Grade-3) by three lengths at Keeneland.

Though he had enough points to start in the Kentucky Derby (Grade-1), DIVINING ROD bypassed the first jewel of the Triple Crown to point for the second: the Preakness Stakes (Grade-1). He stalked AMERICAN PHAROAH and finished a strong third to the first Triple Crown winner in 38 years.

“DIVINING ROD was one of my best horses, so athletic and talented. He was very much like TAPIT, in that he was a top-class competitor who wanted to do things his own way. If you look at the stretch run of his Cigar Mile, he was toying with CONNECT, and it cost him the race. He galloped out in front, thinking he was the winner.”

In the Cigar Mile, DIVINING ROD and CONNECT battled nose-to-nose before CONNECT put his head down first on the wire. DIVINING ROD came back in 2017 to wire the field by seven lengths in the $100,000 Polynesian Stakes at Laurel, then ran second to Sharp Azteca in the $300,000 Kelso Handicap (G2). He completed his career with five wins, four seconds, and five thirds: 14 times in the money from 17 starts.

“This horse has the speed, pedigree — and attitude — to make a terrific sire. He’s 16.1 hands and beautifully balanced. And his dam PRECIOUS KITTEN is the most accomplished race mare to produce a son of TAPIT at stud.”

“Early first-crop results clearly indicate that DIVINING ROD is the best young stallion outside Kentucky,” said Country Life’s Josh Pons. “His babies want to stretch out to a distance. They don’t step on their pedigree at the eighth pole, they draw on it to finish strong. Think of his career: He loses a Grade One by a head-bob. He places in a classic to a Triple Crown winner. He runs a 105-Beyer and a 1-Ragozin in the Cigar Mile—huge numbers in a stallion-making race. All the partners have supported him at stud, and now in their racing stables.”

DIVINING ROD Photos
Progeny
First foals are arriving in 2019 and are outstanding.